Satellite-enabled 5G services have the potential to provide worldwide connectivity. For the first time now, selected extensions of 5G New Radio (NR) to support non-terrestrial networks (NTN) have been successfully demonstrated over a geostationary (GEO) satellite. The Munich Center for Space Communications of the Bundeswehr University Munich carried out the bidirectional over-the-air tests based on the Fraunhofer Institute for Integrated Circuits IIS’s extended 5G New Radio protocol stack for satellite.

When transmitted via GEO satellites, radio signals have to bridge great distances. This leads to delays, so that an enhanced 5G air interface is required. These challenges are addressed in the current work program for Release 17 of 5G NR within the 3rd Generation Partnership Project (3GPP) standardization by specifying new features supporting non-terrestrial networks in 5G.

In order to provide an early proof of concept, Fraunhofer IIS and the Munich Center for Space Communications (Bundeswehr University Munich) recently tested some of the planned extensions for 5G NR via GEO satellite. The over-the-air demonstration was conducted within the 5G METEORS program, an ARTES MakerSpace for 5G and satellite communication funded by the European Space Agency (ESA).

During the over-the-air tests, the user equipment (UE) performed the initial connection setup to the 5G base station (gNB) by using a specifically adapted random access procedure for 5G over satellite. After the successful setup of the connection, the 5G uplink and downlink transmission signals were decoded with two different modulation schemes, namely QPSK and 16-QAM. Furthermore, a 5G timing advance procedure, which worked smoothly, was tested to keep the UE synchronized to the gNB.

The transmissions utilized a bandwidth of 10 MHz in uplink and downlink. Both the UE and the gNB were located on ground. The round-trip time of the system from gNB to UE and back was measured between 530 and 570 milliseconds.

The 5G base station as well as the 5G user equipment used in the experiments are fully software-defined solutions. Both components are based on OpenAirInterface (OAI), an open-source implementation of the 5G New Radio protocol stack, which runs on general purpose platforms.

Fraunhofer IIS contributed to OAI with selected features of the 5G NR waveform and the adaptations for satellite communication. Important 5G protocol stack implementations for this successful test were funded as part of the European Union Horizon 2020 EU-Korea project 5G-ALLSTAR. 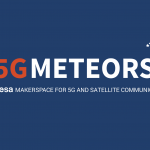